The Structure of Language

orifactoryUnderstanding the Structure of Language is critical to Mastering Communication.

(Note here that Shannon and Weaver talked three key considerations, syntactic, semantic, and pragmatic.  Under the Structure of language, I don’t include a discussion of pragmatics.  Pragmatics means did the communication achieve the goal.)

Language is the ability to produce and comprehend both spoken and written (and in the case of sign language, signed) words and graphic, auditory, orifactory, and visual signals.
Understanding how language works means reaching across many branches of psychology—everything from basic neurological functioning to high-level cognitive processing.
Language shapes our social interactions and brings order to our lives. Complex language is one of the defining factors that makes us human.
Most of the time, if not all of the time, we communicate with each other using language without considering the complex activity we are undertaking, forming complex words and sentences in a split second.
We know immediately when someone uses language structures that are inappropriate or incorrect because we have learned the rules that govern the language(s) we use.
In this lesson, we will look at the structures we use in more detail, in order to help us to understand the structures we find in languages that may be arranged in ways quite different from what we may be comfortable with.
There are many approaches to the study of language. Some linguists are more interested in discovering the basic, innate structures that we all have in our brains, regardless of which language(s) we speak.
Linguists working in what is known as the generative tradition seek to understand universal grammar, the structures that human languages have in common and that we may be born with the capacity to use. The generative approach focuses on the formal characteristics of language structure, seeking to uncover the rules that ‘generate’ well-formed sentences.
Other linguists take a more functional approach, studying language use in context; in other words, what actually comes out of our mouths rather than what may be stored in our heads. Functional approaches seek to incorporate the meaning and broader context of language in order to fully understand language structure.
My lessons focus more on the functional approach.  The question for me is not how we structure language, as much as how we structure language best to achieve a specific intent.

Two of the concepts that make language unique are grammar and lexicon.

Because all language obeys a set of combinatory rules, we can communicate an infinite number of concepts. While every language has a different set of rules, all languages do obey rules. These rules are known as grammar. Speakers of a language have internalized the rules and exceptions for that language’s grammar. There are rules for every level of language—word formation (for example, native speakers of English have internalized the general rule that -ed is the ending for past-tense verbs, so even when they encounter a brand-new verb, they automatically know how to put it into past tense); phrase formation (for example, knowing that when you use the verb “buy,” it needs a subject and an object; “She buys” is wrong, but “She buys a gift” is okay); and sentence formation.

Every language has its rules, which act as a framework for meaningful communication. But what do people fill that framework up with? The answer is, of course, words. Every human language has a lexicon—the sum total of all of the words in that language. By using grammatical rules to combine words into logical sentences, humans can convey an infinite number of concepts.

Language is such a special topic that there is an entire field, linguistics, devoted to its study. Linguistics views language in an objective way, using the scientific method and rigorous research to form theories about how humans acquire, use, and sometimes abuse language. There are a few major branches of linguistics, which it is useful to understand in order to learn about language from a psychological perspective. 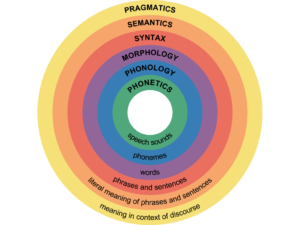 Major levels of linguistics: This diagram outlines the various subfields of linguistics, the study of language. These include phonetics, phonology, morphology, syntax, semantics, and pragmatics.

Phonetics is the study of individual speech sounds; phonology is the study of phonemes, which are the speech sounds of an individual language. These two heavily overlapping subfields cover all the sounds that humans can make, as well as which sounds make up different languages. A phonologist could answer the question, “Why do BAT and TAB have different meanings even though they are made of the
same three sounds, A, B and T?”

Morphology is the study of words and other meaningful units of language like suffixes and prefixes. A morphologist would be interested in the relationship between words like “dog” and “dogs” or “walk” and “walking,” and how people figure out the differences between those words.

Syntax is the study of sentences and phrases, or how people put words into the right order so that they can communicate meaningfully. All languages have underlying rules of syntax, which, along with morphological rules, make up every language’s grammar. An example of syntax coming into play in language is “Eugene walked the dog” versus “The dog walked Eugene.” The order of words is not arbitrary—in order for the sentence to convey the intended meaning, the words must be in a certain order.

Semantics, most generally, is about the meaning of sentences. Someone who studies semantics is interested in words and what real-world object or concept those words denote, or point to. Pragmatics is an even broader field that studies how the context of a sentence contributes to meaning—for example, someone shouting “Fire!” has a very different meaning if they are in charge of a seven-gun salute than it does if they are sitting in a crowded movie theater.

The Structure of Language

Explain the hierarchy of the building blocks of language

Every language is different. In English, an adjective comes before a noun (“red house”), whereas in Spanish, the adjective comes after (“casa [house] roja [red].”) In German, you can put noun after noun together to form giant compound words; in Chinese, the pitch of your voice determines the meaning of your words; in American Sign Language, you can convey full, grammatical sentences with tense and aspect by moving your hands and face. But all languages have structural underpinnings that make them logical for the people who speak and understand them.

Rapping in American Sign Language: Shelby Mitchusson performs an ASL translation of “Lose Yourself” by Eminem. ASL and other sign languages have all the same structural underpinnings that spoken languages do.
Five major components of the structure of language are phonemes, morphemes, lexemes, syntax, and context. These pieces all work together to create meaningful communication among individuals.

A phoneme is the basic unit of phonology. It is the smallest unit of sound that may cause a change of meaning within a language, but that doesn’t have meaning by itself. For example, in the words “bake” and “brake,” only one phoneme has been altered, but a change in meaning has been triggered. The phoneme /r/ has no meaning on its own, but by appearing in the word it has completely changed the word’s meaning!
Phonemes correspond to the sounds of the alphabet, although there is not always a one-to-one relationship between a letter and a phoneme (the sound made when you say the word). For example, the word “dog” has three phonemes: /d/, /o/, and / g /. However, the word “shape,” despite having five letters, has only three phonemes: /sh/, /long-a/, and /p/. The English language has approximately 45 different phonemes, which correspond to letters or combinations of letters. Through the process of segmentation, a phoneme can have a particular pronunciation in one word and a slightly different pronunciation in another.

Morphemes, the basic unit of morphology, are the smallest meaningful unit of language. Thus, a morpheme is a series of phonemes that has a special meaning. If a morpheme is altered in any way, the entire meaning of the word can be changed. Some morphemes are individual words (such as “eat” or “water”). These are known as free morphemes because they can exist on their own. Other morphemes are prefixes, suffixes, or other linguistic pieces that aren’t full words on their own but do affect meaning (such as  the “-s” at the end of “cats” or the “re-” at the beginning of “redo.”) Because these morphemes must be attached to another word to have meaning, they are called bound morphemes.
Within the category of bound morphemes, there are two additional subtypes: derivational and inflectional. Derivational morphemes change the meaning or part of speech of a word when they are used together. For example, the word “sad” changes from an adjective to a noun when “-ness” (sadness) is added to it. “Action” changes in meaning when the morpheme “re-” is added to it, creating the word “reaction.” Inflectional morphemes modify either the tense of a verb or the number value of a noun; for example, when you add an “-s” to “cat,” the number of cats changes from one to more than one.

Lexemes are the set of inflected forms taken by a single word. For example, members of the lexeme RUN include “run” (the uninflected form), “running” (inflected form), and “ran.” This lexeme excludes “runner (a derived term—it has a derivational morpheme attached).
Another way to think about lexemes is that they are the set of words that would be included under one entry in the dictionary—”running” and “ran” would be found under “run,” but “runner” would not.

Syntax is a set of rules for constructing full sentences out of words and phrases. Every language has a different set of syntactic rules, but all languages have some form of syntax. In English, the smallest form of a sentence is a noun phrase (which might just be a noun or a pronoun) and a verb phrase (which may be a single verb). Adjectives and adverbs can be added to the sentence to provide further meaning. Word order matters in English, although in some languages, order is of less importance. For example, the English sentences “The baby ate the carrot” and “The carrot ate the baby” do not mean the same thing, even though they contain the exact same words. In languages like Finnish, word order doesn’t matter for general meaning—different word orders are used to emphasize different parts of the sentence.

Context is how everything within language works together to convey a particular meaning. Context includes tone of voice, body language, and the words being used. Depending on how a person says something, holds his or her body, or emphasizes certain points of a sentence, a variety of different messages can be conveyed. For example, the word “awesome,” when said with a big smile, means the person is excited about a situation. “Awesome,” said with crossed arms, rolled eyes, and a sarcastic tone, means the person is not thrilled with the situation.