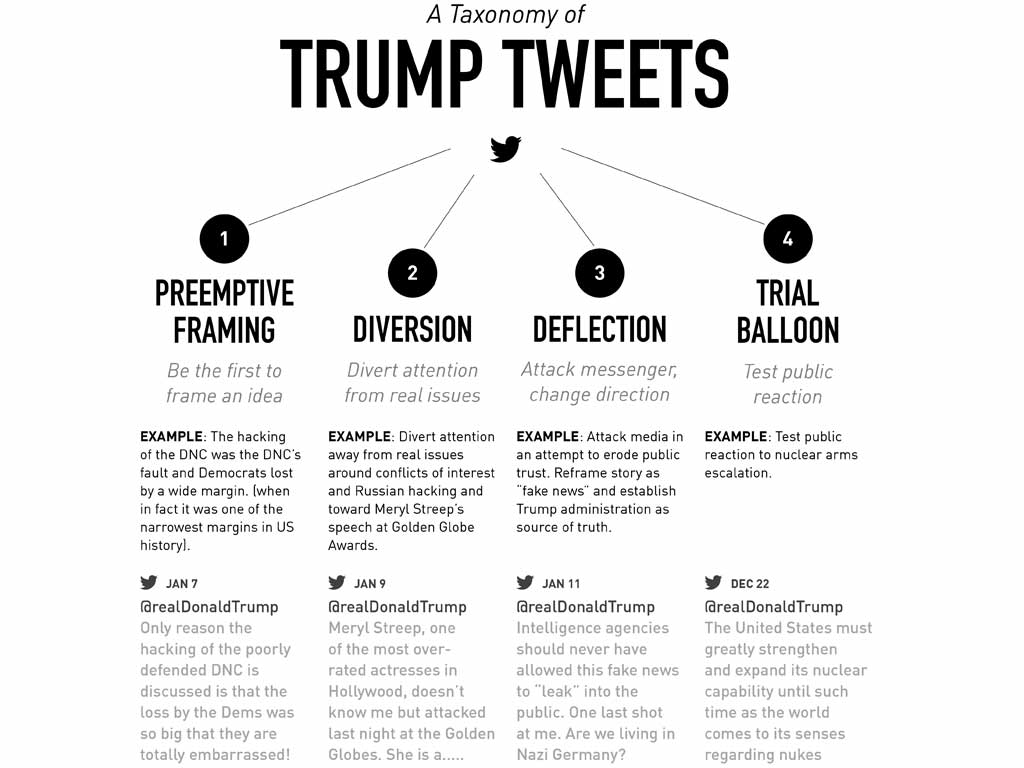 When asked during a NATO press conference if President Trump will tweet differently once departing on Air Force One, the president said he will not because he is a “stable genius.”

His smartphone has become one of the most powerful weapons in political history. As a result, there’s a growing pressure campaign by many Democrats to force Twitter to ban him. But kicking Trump off of Twitter would fail to address the real problem.

For one thing, Trump also uses Facebook. And if Facebook banned him, he’d simply jump to another social media platform like Gab, a Twitter copycat popular with white supremacists. His “tweets” wouldn’t miss a beat. They’d just be thumbed into a different platform.

Trump’s tweets are irresponsible and un-presidential. Yet the real problem is not Trump’s addiction to social media – it’s ours. Trump uses Twitter to control news cycles because the press, the political class and his Democratic opponents continually empower him to do so.

Every time Trump tweets, he can count on an instantaneous reaction. His tweet fixation fuels a parasitic economy in which people compete to ride his digital coattails. Reporters, Democratic politicians, and social media influencers fall for it every time. They obsessively retweet, analyze and attack. This helps Trump tremendously.

First, they ensure that he dominates the airwaves – and the brainwaves. By focusing massive attention on Trump’s antics, they make him seem larger than life. This produces a cognitive effect called the “focusing illusion,” and it helps explain how Trump ascended from political clown to the presidency. He turned the media into a Twitter news service.

Second, they spread his message. Constant repetition of Trump’s words allows him to set the agenda. Like clockwork, his fellow tweet addicts – including his opponents – repeat every word. They enable him to embed his ideas and images into millions of brains, even yours. For example, which former presidential candidate comes to mind when you see the word “Crooked”? Trump got into your brain.

Third, the continual anti-Trump outrage bolsters his credibility with his base. He can play the victim of the “establishment” he promised to disrupt. He acts, but his opponents only react. He maintains heroic control.

The reasons why it works this way can be found in the cognitive sciences. By allowing Trump to constantly activate his ideas in our brains, we strengthen the neurocircuitry for those ideas. This allows Trump to dominate on a subconscious level – and 98 percent of thought is subconscious.

Trump isn’t a genius. He’s a super salesman, and has been for most of his life.

Now he’s president, and our gullibility to his antics threatens our democracy. That’s because Trump often uses social media to distract from what he’s actually doing, like dismantling our government and robbing the working class to pay off the rich. He often uses his tweet tantrums to “step on” big developments in the Russia investigation, creating a bigger story (“nuclear button!”) to distract attention.

With investigators closing in on Trump’s possibly treasonous Russia dealings, think of him as a trapped rat with a Twitter account. His attempts to distract will only intensify, but we must stop falling for them.

This doesn’t mean ignoring Trump. It means maintaining a steely focus on things that really matter, like the attack on our public institutions, the massive transfer of wealth and power to the rich, the resurgence of extreme racist politics, and the criminal investigation into the Trump Organization.

Let’s reclaim our power to decide what’s important. Let’s shrink Trump down to size. Let’s take away his power to control our brains.

During a famous exchange in 2016, Hillary Clinton accused Trump of being a Russian “puppet.”

“No puppet, no puppet,” Trump replied. “You’re the puppet.”

It turns out that we were all puppets. As long as we allow Trump to manipulate our public discourse with his fingertips, we’ll remain puppets. It’s time to cut the strings.

This was written by George Lakoff – professor emeritus of cognitive science and linguistics at UC Berkeley, and Gil Durán is former press secretary to Gov. Jerry Brown.